Want to play with fast guitar playing speed but don't know how to do it consistently and cleanly?

First step is to stop believing in the following myth:

This is a common false belief that actually hinders your ability to play as fast as you want.

Increasing your guitar speed is about getting as much as you can from as little movement as possible.

You want to make your finger and hand movements 100% efficient so there is no wasted movement or energy that can lead to sloppy mistakes.

Use these three tips to get fast guitar playing speed that feels effortless just like the pros:

Tremolo picking is an excellent way to add speed into your playing without performing complicated fretboard patterns or movements.

Having fast and clean tremolo guitar technique means being able to pick a note (or multiple notes) fast while maintaining consistent speed.

It’s not just about picking as fast as you can, it’s about using efficient picking movement.

Focus on minimizing how much your picking hand moves while tremolo picking by actively watching your hand as you play. Then focus on increasing how long you can tremolo pick without making mistakes.

One of the most frustrating causes of mistakes while using fast guitar playing speed is not having your hands in sync together.

One of the biggest reasons why this happens is you are using inefficient picking motion.

This is what makes it feel like a struggle to play with fast guitar speed during scale runs leading to inconsistent results and tons of unnecessary frustration.

Using alternate picking as your only approach to playing scales.

Why is this a problem for speed and efficiency?

Using strict alternate picking while moving from one string to the next causes you to waste motion by moving in the pick in the opposite direction of the next string you want to play.

This makes it very hard to consistently play guitar clean and fast.

As a more picking efficient alternative, try using what I call “directional picking.” 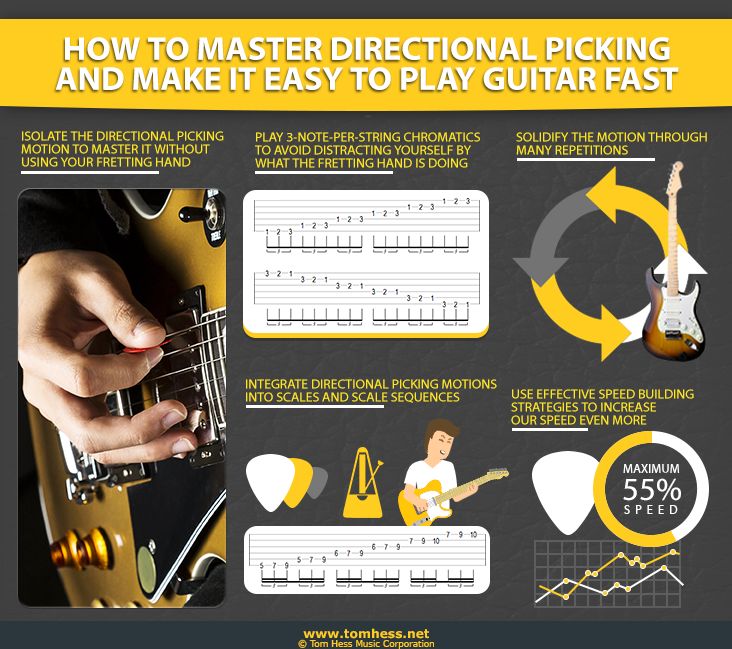 Here is an example of what directional picking looks like when applied to a 3 note per string scale:

This makes fast guitar playing speed become effortless as you improve with the technique over time. Try implementing directional picking into your guitar playing by slowly phasing out your old picking approach and replacing it.

Using too much energy to fret notes is a common cause of sloppy mistakes while using fast guitar playing speed. It can also lead to injury which may keep you away from playing guitar for a period of time if left unchecked.

Always fret notes on guitar using only as much force as needed to create the sound you want. This makes using fast guitar playing speed feel much more effortless.

Before each guitar practice session, work on using just enough fretting hand pressure to get notes to sound until this becomes the normal way you play.

This aspect of guitar playing is very important, which is why I have created a video to make sure you get it right.

Learn more about how to play guitar fast and clean with ease in this video about eliminating tension in your guitar playing.