5 Easy Tricks You Can
Learn In 10 Minutes

Ever notice how many guitarists prefer to play lead guitar licks instead of guitar chords?

Why does this happen?

The true reason is:

You can add this skill into your guitar playing today.

(Even if you are not an advanced in your guitar playing yet.)

You can use this skill to write better songs and have more fun being a musician.

And the best part?

The better you are at playing cool chord progressions, the better your lead guitar playing sounds too (you see how below).

Let's get into it!

Watch this video to see how cool your guitar playing sounds when you have fun with creative guitar chords: 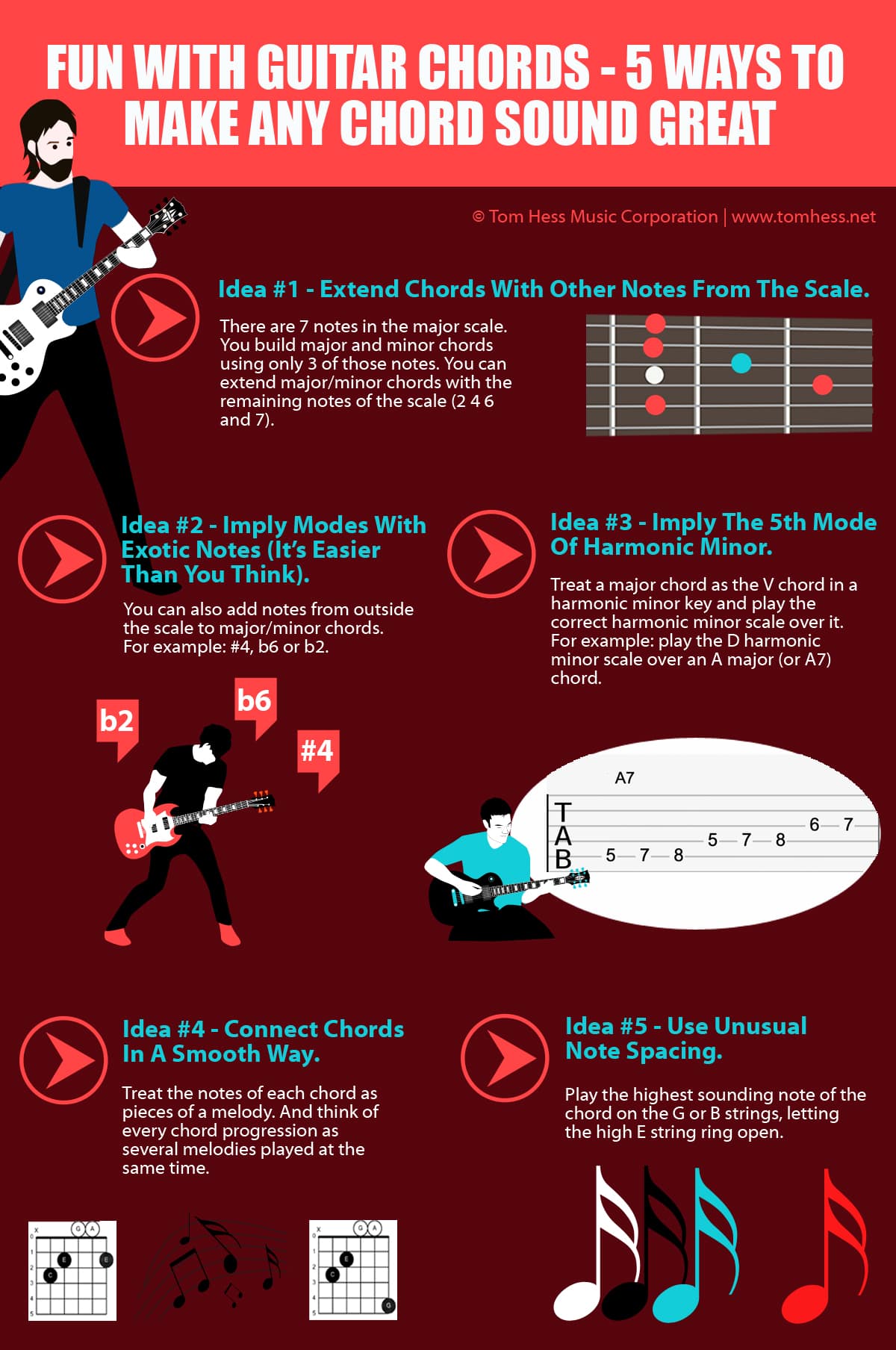 Idea #1. Play Creative Guitar Chords With Other Notes From The Scale. Here Is How:

You know how there are 7 notes in the major scale?

You build major and minor guitar chords using only 3 of those notes. (Use notes 1 3 5 of the major scale to build major chords. And use notes 1 b3 and 5 for minor chords).

Then you play creative guitar chords that sound even more colorful. (And most of these extended chords are very easy to play.)

Try this: Take any chord progression (group of guitar chords) you know well and add other notes from the scale to each chord. 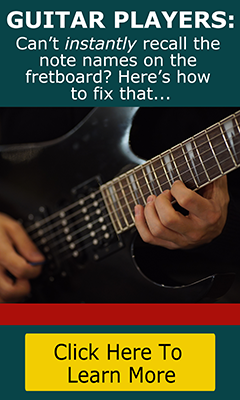 … but what about adding notes from outside the scale to spice up your lead guitar playing ideas?

This is how you move beyond standard major & minor keys and imply different modes with just 1 chord.

Here are some examples:

It’s just a Bb major chord with an added E note (the #4 note of the Bb major scale). Watch the first video on the page (from 3:49) to see how to play this chord.

If you play this chord by itself, you are in the key of Bb Lydian. You can play a Bb Lydian (F major) scale over it.

Example 2: G major add 9 add b6 – this is a G major chord with added notes A and Eb. Watch the first video on this page (from 1:22) to see and hear how to play this chord.

(It implies the 5th mode of melodic minor.)

Example 3: A minor major 7th chord – this is an A minor chord with an added G# note (the raised 7th of the A minor scale).

Question: “Tom Hess, can I also add more than 1 note to my guitar chords at the same time?”

Answer: Of course. Watch the video at the top of this page to see and hear several examples of extending chords with several notes.

If you struggle finding the notes on your guitar neck, watch this guitar playing video:

Tip: Soloing over creative guitar chords with added notes is a lot of fun. It’s even more fun when you know how to squeeze maximum emotion from every note. Download this free lead guitar playing and soloing eGuide to discover easy ways to express yourself with only a few notes.

Idea #3. Imply The 5th Mode Of Harmonic Minor With A Single Major Chord. Here Is How:

Want to know the secret to making simple major guitar chords sound great? Here it is:

Here is how to add creative guitar chords into your guitar playing aresenal:

How To Create Killer Guitar Licks
Get tons of new ideas to improve your lead guitar playing creativity.

Improve Guitar Playing Creativity
Learn the main reasons why you struggle to be creative on guitar.

Become A Much Better Songwriter
Learn new and innovative ideas to quickly improve your songwriting.

Idea #4. Connect Guitar Chords In A Smooth Way. Here Is How:

Most guitarists think of guitar chords as isolated chunks of notes.

Few pay attention to how the notes in one chord move to the notes of another chord.

But believe it or not:

… chords were originally created out of melodies.

You can think of each note in a chord as a note in a melody. And when you play guitar chords, think of multiple melodies being played at the same time.

Creative guitar chords with great voice leading stand out in a sea of repetitive block chords.

What if you broke this pattern?

Check out these guitar chords:

Notice how the high E string is NOT the highest sounding note in any of these chords. The highest note in these chords is often played on the B string.

This type of playing is very common on piano (but is less common on guitar).

It is a very simple way to effortlessly use creative guitar chords in your playing.

You now know how to play creative guitar chords. The next step is to make your lead guitar playing sound awesome when you solo. Download this free guitar soloing guide and discover easy ways to play guitar solos you’ll feel proud of.