One of the biggest causes of sloppy lead guitar technique is notes bleeding together unintentionally.

This mistake is not too hard to fix when you understand:

a) the specific reason why it is occurring and

b) the situations it is most likely to occur in.

After you correct this issue, your guitar technique instantly becomes MUCH cleaner.

Watch this video to learn how to keep notes from bleeding together:

My #1 tip for cleaning up sloppy bleeding of notes is:

Answer: No. This statement is a gross oversimplification. There are many different types of mistakes that can happen when you play guitar. The main ones are:

- notes being out of tune

Distortion compresses the sound. This means mistakes become louder and easier to hear.

But here is the good news:

Since mistakes become easier to hear – they are also easier to correct. That’s because it becomes immediately obvious when you fixed them.

So, is there ever a benefit to practicing guitar with a clean tone?

That’s because distortion does cover up inconsistent articulation.

(Although an even better way to spot it is to practice unplugged.)

So, on the whole… the best way to practice to clean up your playing is:

1. Using distortion about 80% of the time. This helps you clean up sloppy string noise and nasty bleeding.

This will not only improve your articulation, but will make your synchronization tighter too.

Question: “But Tom Hess, I heard you are supposed to pick as lightly as possible. How can picking strings really hard be a good idea? ”

Answer: Picking as light as possible makes it hard to keep your hands in sync. That’s because you don’t get the tactile response from your pick and finger fretting each note at the same time.

Instead of picking as light as possible – focus on relaxing excess tension through your body.

As you play, relax everything from:

This is called: a “tension audit”.

…your playing will feel very easy.

(Even if you are picking notes with eye-popping articulation.)

And your synchronization will sound and feel very tight as a result.

Question: “Tom Hess, how do I clean up sloppy bleeding noise in arpeggios?”

What is finger rolling?

Finger rolling is where you fret more than 1 note on different strings on the same fret… with the same finger.

And if you are not careful – finger rolling can get sloppy very fast. 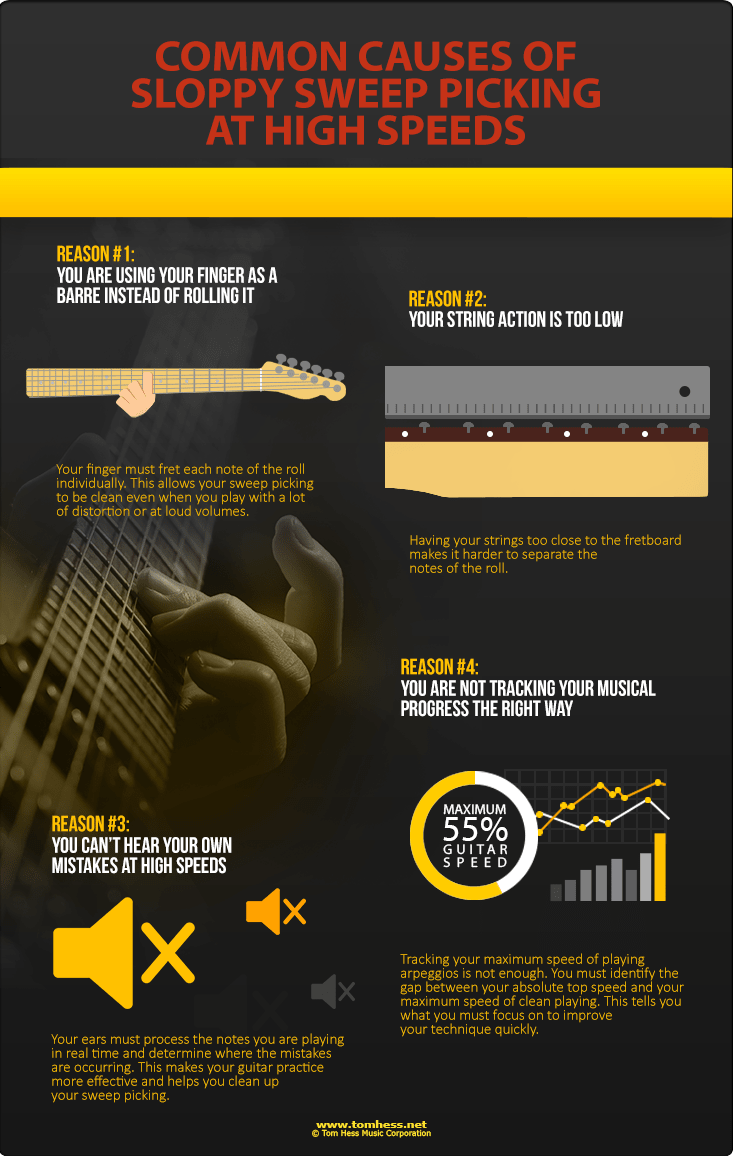 Here is how to do finger rolling the right way:

1. Fret a note with your fingertip (exactly as you would play any other note).

2. Collapse the first knuckle of your finger to fret the second note. This means: bend the knuckle the opposite way of how it would normally bend, so your finger almost looks like a banana.

When you do this, you get to release the first note of the roll, while fretting the second. At the same time, your fingertip continues to stay in contact with the first string keeping it muted.

This is what allows you to do the finger roll with no bleeding.

3. (Only needed if doing the 3-string roll), rock your wrist backwards to roll the finger onto the 3rd string of the roll.

This will release the second note of the roll – while fretting the 3rd.

How do you descend it?

Answer: by reversing the motion in the exact opposite direction from how you played it ascending.

That is how you rewind the motions of a finger roll.

In a barre, all notes under your finger ring at the same time.

This is the exact opposite of what you want when you do finger rolling.

Get the barre image out of your head completely. Instead, think about making notes ring separately.

Question: “Tom Hess, I practice finger rolling, but the notes are bleeding together. Problem is: this only happens at fast speeds. If I slow down - the problem goes away. When speed back up – it comes back. What can I do?”

Answer: This problem is very common.

The solution is simple:

When you can already do a technique (such as rolling) really well, slow practice doesn't do anything to help you master that technique.

Here is what to do instead:

Find the exact tempo where your bleeding problems first begin. Then practice right around that tempo.

For example: if the tempo where your bleeding first starts is 100 beats per minute…

This will be just challenging enough to require your full concentration… but easy enough for you to control everything and make your finger rolls clean.

As you get better at playing around the edge of your clean playing speed - this speed will move (increase).

Increase the tempos you practice at right along with it.

Also, record yourself playing finger rolling and listen to it at half speed. This will tell you where the notes are bleeding together, so you know what to focus on when you practice cleaning up your playing.

You now know what it takes to clean up sloppy noises in your guitar technique.

The next step is to transform the rest of your guitar playing, so you can fully reach your musical goals.

I can help you with this in my Breakthrough Guitar Lessons. 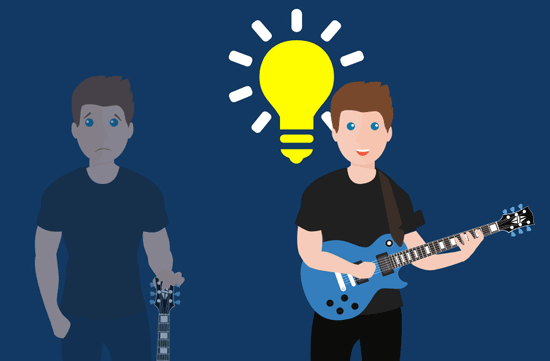 Here is how it works:

You tell me about your musical background, goals, challenges and frustrations. From that, I’ll create a customized lesson plan to get you playing guitar the way you want.

As you practice your lessons, you and I stay in frequent contact.

I track your progress, give you feedback on your guitar playing and hold your hand every step of the way to nearly guarantee your results.

To begin, go to: https://tomhess.net/Guitar

“Before I started taking correspondence lessons I was basically stagnant in my playing. I had kind of reached what I thought was a pinnacle and I started looking for what’s next, what’s bigger and better… and I just happened across Tom’s lessons and since then I’ve realized that this plateau that I was feeling was way down here and now he’s helped me tremendously. I know I can do things on the guitar that I could’ve never dreamed of five years ago.”

I chose to take guitar lessons with Tom over anybody else because a) Tom is a professional musician, and I want to learn from people who are making a living as a musician and b) he just had a wealth of knowledge that he freely gives to you to kind of say here, you know here is the golden nugget.

So if I were to compare Tom’s correspondence lessons with just taking private lesson in a local market, it’s night and day. For one thing, Tom’s lessons are easy to understand, they’re very in depth and they’re tailored to what you want to learn… versus private lessons, a lot of times the teachers are using their students as guinea pigs to figure out how to teach… and Tom’s not doing that, he’s knows what he’s doing.

Thoughts when I started with Tom were “Is this going to work for me?” because it was definitely not the norm. And my thoughts now are “Hell yes it’s going to work”, because you see results.

Tom’s goal-oriented approach has helped me, I guess break horizons and get results that I could’ve never gotten before. Only because he helped me flesh out how I want to play and how to get there. He gave the goals and the path to get there, and it’s been excellent. Tom is like he says, an ordinary guy, but he’s doing extraordinary things, and I know in my life that’s what I want to do. I just want to be an ordinary guy that is impacting lives, and that’s been huge from Tom.

“I started playing guitar maybe about 15 years ago. I had a really crappy teacher. Basically, based on some bad advice I went to learn classical guitar. I mean I wanted to learn electric guitar, but my friends learned classical, then acoustic, then electric. So I foolishly went to the music school and said I want to learn classical guitar, but they never asked me why, what do I want to do, so they said yeah ok, here’s a guitar, let’s go.”

So after about a year of faking trying to learn music notation, I quit. But I really loved, music, the guitar, so, I’m a pretty creative person in general, so I just you know, came up with a whole bunch of stuff on the guitar. I was self-taught for many years, until I came across Tom’s website. And then what happened was… after reading all of his articles, I used his article on how to choose a guitar teacher, and I went around my local city in Kuala Lumpur, trying to find teachers based on that criteria and of course they couldn’t even meet one criterion. And I actually went for a few lessons, and after a while it was like, well, it’s not worth it, I’m just going to go with Tom.

He has a lot of freaking awesome students. I’ve been playing guitar for 15 years, I’ve been a correspondence student for about 5 years or 6 years, everything prior to that was just a waste of time.

The forum is beyond words. I mean, I ask a question and I get 20 responses or 10 responses from very helpful people. Everybody is trying to help there. Nobody is criticizing like anybody. Everybody is just so helpful. It’s like having 20 Tom Hesses. It’s like, you know… 20 mentors, 20 people… more than that actually. So I think the forum is awesome for that. Not only because of the information available there, but just because of the people willing to help.

“I started lessons when I was a young kid. I was in school. I had a casual teacher, but he only taught us chords, like basic stuff if you want to learn like 3 chord songs. But I wanted more than that, so I went to a local guitar teacher. But he also gave me the same thing. But after like 5 or 6 years of lessons, like I found myself, like if I heard a backing track or something, I couldn’t play with someone. I mean I didn’t feel like a musician, I feel like someone who can just move his fingers from like fret 1 to fret whatever. But with Tom, he’s giving me the tools to become what I want to become, become the musician I want to become. And this is exactly what I want.”

Tom Hess was basically the only guy on the internet with the credentials and the reviews, and basically everyone recommended him. He even had his own students webpage. All his students were like established guitar teachers and professional musicians and they had their own sites and I contacted like 7 of them, and they all recommended Tom Hess, and that’s why I joined him.

I like taking lessons with Tom because he gives me what I want. It’s not like something general for everyone. Like if you want to learn blues, he gives you lessons for blues, but I want to become a metal player and also a neoclassical player, so he’s giving me exactly what I need and what I want. And if I have a problem I just post a thread on the amazing forum, and I get like answers, not just short answers, but really detailed answers. I feel like I am taken care of, I don’t have to worry about anything. If I just follow everything word for word what Tom gives me in all of the lessons, that’s if I have time, because they’re so big, I mean every lesson, people think it’s overpriced, but each lesson, if you want to master it, take everything out of it, is going to take you like 4 weeks of 2 hours of work every day.