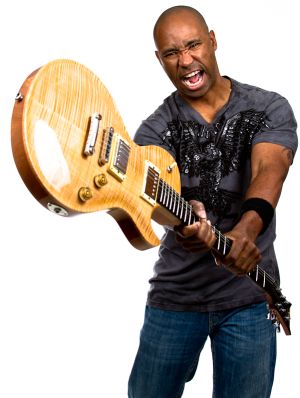 Michael Edwards has been playing live music in bands across the US and Japan as a guitarist/singer/songwriter for over fifteen years.  From rocking the Friendship Festival Airshow in Tokyo to lighting up the rock and metal scenes in Fussa City, Okinawa, Georgia, South Dakota, and Florida, playing live has been an integral part of Mike’s background.

Recent highlights include stage performances in front of 130,000 spectators at the Yokota Air Base Friendship Festival, performances for the Kotobuki Company Employee’s party, and shows entertaining Air Force personnel on the base.

His stage presence and fierce capacity for performance has given him the reputation as one of the most disciplined and hardest working musicians you will ever meet.  Most recently, Mike released a single called “You and Me” which he wrote, recorded, and produced for an upcoming compilation album dubbed ECLIPSE.  With influences ranging from artists such as Sevendust, Alter Bridge, Zakk Wylde, John Petrucci, and John Mayer, Mike’s music truly sets fire to the soul.

In November 2010, Mike was crowned the 1st place winner of the 2010 Yokota Idol singing competition claiming the grand prize of $1,000!  Additionally, Mike organized, orchestrated, and performed in an outdoor benefit concert called TOMODACHISTOCK at Yokota Air Base in Tokyo Japan, where his efforts led to the collection of $24,366.20 for the RED CROSS Japan Earthquake and Tsunami relief fund!

When off stage and out of the studio, Mike teaches private guitar, bass, and vocal lessons and continues his work on his development as an artist. Mike is currently studying under Tom Hess in the Music Careers Mentoring Program to sharpen his skills and build his credentials as a professional musician.

Wish you had the blueprint for what it requires to get started in the music business and turn it into your #1 source of financial stability?

People looking to get into music want to understand how to:

- Quit a lousy job to work in music

- Never have to worry about finances

Below are 5 mistakes to stay away from in order to make growing a music career less complicated:

1. Don't get your music career success advice from those who do not have expertise or can offer tons of proof that they have made it for themselves.

2. Dont think that doing work in the music business is risky. It's actually very dependable when you realize how to do it.

3. Don't attend university for a music degree unless it is totally% necessary for your particular musical goals.

4. Don't ignore the importance of cultivating a local fanbase as well as building a following of fans online.

5. Don't gamble on getting lucky to guide your music career success.

Developing a music career totally by yourself is the worst way to add risk and unpredictability into your music career. This gives you the professional experience, instruction and guidance of an individual who has already acquired whatever you wanted to in this business. Having this person working with you gives you the ability to do what you want in your career without all the mystery.

Working with a mentor helps you learn specifically what you need to do, say and have to become the proper person in the music biz for the most important opportunities.

This makes you feel motivated every step of the way until you accomplish your musical goals.

Find out how to get the best music career jobs.