Will This Program Work In My Country?

I mentored musicians literally all over the world (North America, South America, Europe, Asia, Australia, even Africa) and I’ve yet to see a country where what I teach “didn't work”.

Being in the music business is the same as being an entrepreneur or a small business owner. There are entrepreneurs in every industry in just about every country.

Music is no different.

Here are a few of the musicians I mentored from all over the world:

To be clear: I'm not promising, guaranteeing or even implying that you will get those kinds of results.

Your results may be the same, more or less.

I'm just showing you what is possible with the right mentoring and consistent, focused action on building your career.

Here are more success stories from musicians from all over the world:

“I joined the Music Careers Mentoring Program when I was 17 years old and I think it's been a great experience, it's been very life changing for me.”

I went out of school and started my own business as a producer and as a musician, and I've been doing great since. Currently I am producing for semi-big Danish artists, and in addition, I'm playing in 3 bands. One of them is very exciting artistically for me, one is having amazing success, we've just been signed to a management with Sony Music Denmark, and the last one is making good money, so I can live off that.

“I've learned more things than I expected, in a wide range of issues about the music industry. Before that, my music awareness was pretty vague, I didn't know exactly what to do.”

Tom knows what he's talking about. It's crystal clear, what he says makes total sense. He is very knowledgeable about music - about music AND the business part.

I know I will succeed.  And Tom really enforces that feeling even more.

"As a mentor and teacher, Tom has had a profound influence on my development as a musician and more importantly, my level of fulfillment as a person who is now living their passion.” 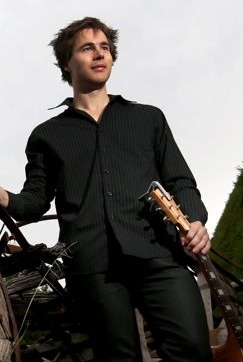 Tom has an exceptional level of knowledge and understanding in music, music business and how to effectively teach music, and he delivers this with a holistic, highly-detailed and goal-oriented approach. Tom's teaching style is bold and powerful, and unlike many teachers, he actually has the credential's to back up what he preaches, having already achieved international success as a touring and recording artist and world-class guitarist.

“I’ve done what’s in the Music Careers Mentoring Program and made some great advances, and hope to make many many more.”

I’m a full time musician, I have my own music instruction business and I’m a full time musician. I’m part of a band called Firewolfe with one other member from Tom’s Music Careers Mentoring Program. Nick Layton is the other guitar player and we’ve been able to work together. We just put out an album a couple months ago. We just signed a record deal with a Japanese label, Rubicon Music. So we’ll be distributed in Japan. We’ve made many contacts and many steps in the industry where we’re going to continue to move forward in other parts of the world. And hopefully continue this for a long time and continue to grow it. That’s the biggest thing I got from the Music Careers Mentoring Program, to be able to do something on a level where I’ve always wanted to do that, where I’ve thought about that you know, above and beyond just you know trying to be a local guitar hero… trying to get things out to that next level, and continue to go to the next level from there.

The time and money that I’ve invested into the Music Careers Mentoring Program has definitely been worth it. I make my living as a musician, as a full time musician, so anything I’ve invested I’ve gotten back and beyond. It’s made it possible to have a schedule and a life that allows me to do what I want to do. As a musician, one of the greatest obstacles I face is having time to work on your band, to work on your album, to work on the business side of things. And if you have a full time job in some other industry that completely drains you of your energy and your time, maybe you’re working 60 hours a week, you don’t have the time to devote to these other things that you really want to do in your music career. So Tom’s Music Careers Mentoring Program has help me set myself up in a way to where I have the freedom of time, and the freedom of money and those valuable resources so I can put them where I want to put them to be able to do the things that I want to do.

A lot of things that I learned in Tom’s Music Careers Mentoring Program apply directly to Firewolfe in the way that we promote. The way we’ve learned how to promote the band, that I’ve learned how to promote the band. Organization… structure… how to handle the business side of things and get organized so you can get things done and not just sit there and spin your wheels. I think from what I see talking to other people, and what I see online, you get bands, they’ll get an album done and then they go, then what? So you got a CD done, you’ve invested all this time into writing these songs, getting your production together, getting the duplication done, and now you’ve got these boxes of CD’s and you have no idea what to do with them, they just sit there. So the biggest, one of the biggest benefits I’ve gotten from the Music Careers Mentoring Program is learning you know how to promote and how to lay the ground work, how to build relationships within the industry, finding ways to present yourself so that you have value to those people in the industry that will help them want to work with you, so it’s a mutually beneficial relationship that you can create. You know those principles from Tom’s programs have been really really valuable. Not only for the planning on how we were going to do things, but you know the implementation of that so we didn’t just have a CD full of great music and now no way to get it out there. So it’s been big. It’s been really big for the band.