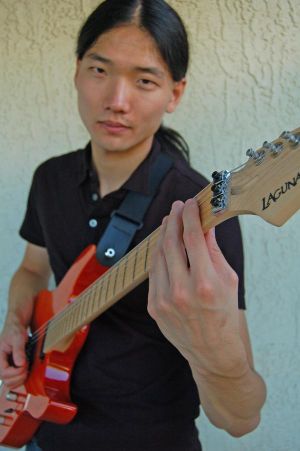 Tim started playing guitar at the age of 14. He was self taught until meeting Tom Hess.

"...And don't worry about what anybody else is doing... Stretch the boundaries, try new things you've never heard and ignore everyone. Push it! And I mean really! Your obvious passion, devotion and self-discipline is a recipe for longevity and mastery of the art" - George Bellas

"Tim Gibson I think is a young KILLER guitar player and is on his way to being a monster player. Good tone, good songs, and great hands and very FAST with hot chops too. And I like his shredding. Hail to my new guitar friend and bro on HALO GUITARS" - David Shankle

"When Tim Gibson first came to me as a student, I could see right away enormous potential. Tim had the mental discipline that most people just simply don't have. It was immediately evident that Gibson was highly "left brain" intelligent, as well as very highly "right brain" creative. This is very rare, as most people generally are strong, in one area or another. Tim has evolved so fast, and so powerfully that it became obvious I was dealing now with a colleague, not a mere student. Today, Tim Gibson is truly a powerful new force in the domain of world-class virtuoso guitarists and guitarist composers" - Tom Hess

"Tim possesses the kind of hunger and drive to constantly improve his knowledge and ability, that makes him the great player that he is today, and the monster player that he is definitely going to be in the future ! It is my pleasure to watch him grow as a musician, and to call him a great friend!" - Vernon Neilly, CEO/PRES, Boosweet Records

"Tim Gibson is an up-and-comer with the phrase 'Loads of potential' tattooed somewhere about his lower shin area. Not sure why he got it there (I might have chosen the arm or something), but oh well. He serves up some musical sushi with a massive dose of wasabi-like technical skills containing enough kick to make even some of the most versed shredders stop what they are doing and tip back a lager or two. (MMM....sushi!!) Anyways, keep an eye on this one." - Shane Gibson, touring guitarist for Virgin Records recording artist Korn

Want to do music as a career? Learn how others are becoming professionals in the music industry.