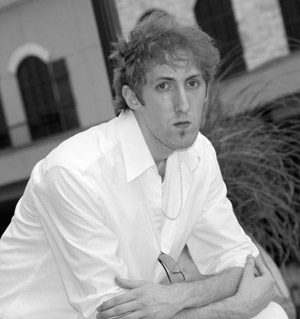 Ysrafel is a recording artist and composer from Oklahoma City, Oklahoma.

He has been playing guitar since he was around 10 years old. He began studying music seriously around the age of 16 when he began learning about music theory, songwriting and improvisation. He has also performed live locally, and improvises jazz fusion music locally with various musicians.

His main guitar playing style has always been technical and focused within the metal guitar genre.

Some of his most influential genres are progressive metal and power metal, but he was also inspired early by technical thrash and many other metal sub-genres.

He is in the process of preparing an instructional guitar DVD over intermediate and advanced guitar concepts, as well as other products such as eBooks and instructional articles for guitar. These are released on his website, where other helpful musical resources can be found.

Some of the instructional material he has created has revolved around the topics of sweep picking, tapping, playing guitar with faster speed, soloing, phrasing, songwriting and music theory.

One of which is titled, "Sweep Picking Mastery," which gives a detailed analysis of sweep picking technique, playing arpeggios clean with speed, all the standard and non-standard arpeggio shapes, plus creative ideas for how to use sweep picking to enhance lead guitar playing and soloing. His other resource on tapping, involves many of the same interesting technique lessons, plus unique approaches to the technique such as string skipping arpeggio tapping with multiple fingers.

He has written many articles for guitar and music instruction that have been published on the internet on well-known guitar player websites. These articles have been viewed by countless thousands of people and are highly rated and their respective websites by members of the online guitar playing community.

Ysrafel writes in several musical styles and genres. This comes from a love of all types of music ranging from latin to electronic to hip-hop to metal. He has always been a collector of music and enjoys listening to new kinds of music for fun and to learn new modes of musical expression. He believes that the more music you listen to, the more you can learn as a musician and grow to apply different musical ideas into novel musical situations for added creative potential.

He is currently working on his upcoming concept release to be titled "La Primavera."

This album will be a guitar instrumental/shred based album fused with electronic/dance stylings, and progressive musical elements.

Learn how easy it is to become a guitar teacher and make money teaching music lessons.