IMPROVE YOUR GUITAR SPEED
BY AT LEAST 100%

The CAGED guitar scales system is one of the most damaging things a guitar student can learn. Here are some of the major problems that CAGED typically causes:

Problem #1: The CAGED system makes it harder to develop your guitar speed… and makes it impossible to reach your maximum speed potential.
CAGED scale patterns contain a mix of 2-notes-per-string and 3-notes-per-string fragments. This inconsistent pattern causes several interconnected problems:
These inefficiencies force your picking hand to move much more than necessary. That slows your picking speed down, making it much harder to play fast and accurately. CAGED makes reaching your maximum guitar speed potential impossible because the picking patterns required to play CAGED scales will never allow you to pick at your top potential speed. The 3-Notes-Per-String scale system not only allows you to actually reach your top speed potential, but you will improve your guitar speed at a much faster rate.
There is a much better way to learn, play and master scales: The 3-Notes-Per-String Scale System
All the inconsistency and inefficiency problems of the CAGED system are totally eliminated in the 3-Notes-Per-String system. Notice the perfectly consistent & efficient picking pattern and movements below.

Each string’s picking pattern is consistent. More importantly, your picking hand is now set up to move in the most efficient way possible.

Perfect picking efficiency means you play much faster, cleaner and easier than you ever could with any other scale system.
The 3-Notes-Per-String system in combination with Directional Picking’s massive efficiency superiority over alternate picking enables you to finally reach your maximum speed potential.
IMPROVE YOUR GUITAR SPEED
BY AT LEAST 100%

Here’s why:
A. When using Directional Picking, the guitar pick travels a much shorter distance (that means playing guitar fast becomes much easier for you).

B. The pick stays in the string trench (the space in between strings) and remains in perfect position to play the next string. This eliminates having to travel in the opposite direction, stop, turn around, jump over the string you just played and then cross that string before it is even in position to move towards the next note in the scale on the next string… 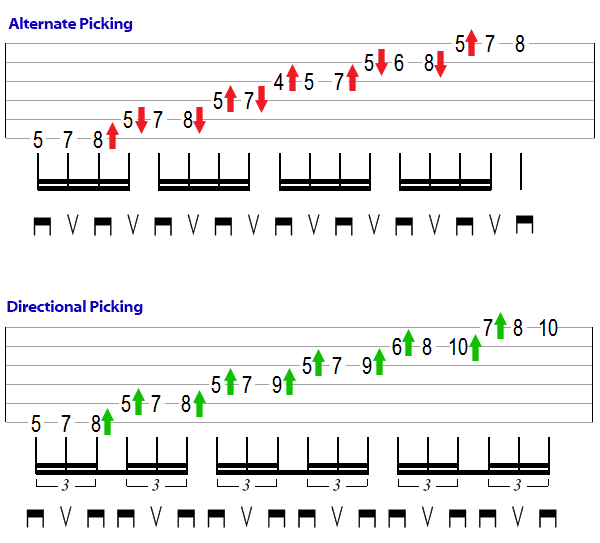 “Ok Tom, I see how the 3-Notes-Per-String method is more efficient when using Directional Picking as you play a scale straight up or down, but who just plays scales ascending or descending when making real music?”
Scale fragments exist in almost every song, almost every solo and almost every phrase. Because these scale fragments are everywhere, the picking inconsistencies (and problems) of the CAGED scales are also everywhere. And yes, sometimes (great) guitar players DO play scales either straight up or down in their music.
“But Tom, why should I care about guitar speed when I’m learning scales on the guitar?”
Guitar speed is not very important when first learning scales, but it will become important after you’ve learned them. So the (big) problem appears once you’ve learned your scales and now you want to build your guitar speed. As objectively proven above, developing your guitar speed will be much harder and take much longer using the CAGED scale system. The same is true when dividing your time trying to learn, master and integrate two different systems.
“But Tom, there are many guitar players who use CAGED or use variants of the CAGED system who can play incredibly fast.”
This is a false argument. It’s called an Argument From Authority, which is a logical fallacy, particularly in this case.
However, if one insists on trying to use an argument from authority, I can also play that game:
For every guitarist you can name who plays fast using the CAGED system of guitar scales, I can name 10 more who play much faster and do NOT use CAGED (nor its variants) … some of my students would also make this list of super fast (non CAGED) guitar players.
Is it possible to play guitar fast using CAGED? Yes. It is. But it’s a LOT harder, takes much longer and increases the chance for playing mistakes (among many other problems that I will explain below).

Problem #2: You Will Have A Harder Time FLUENTLY Improvising Guitar Solos Using The Entire Fretboard
One of the most common problems I see in new guitar students who come to me for lessons is that they can’t fluently solo all over the guitar. Here is why this problem is so common (and hard to correct) in users of the CAGED system:
Although some people claim CAGED is a complete system for all scales, it is anything BUT “complete”. In fact, it is not even a complete system for major scales. It teaches you to play major scales in only FIVE scale patterns that are based on arbitrary chord shapes. To make matters worse, players are supposed to revert their thinking back to some open chord shape that is usually not relevant to the musical content you will be playing in (more on this later).
The next problem is that the major scale actually consists of SEVEN interconnected shapes (modes) that span the entire fretboard… NOT five. (There are 7 shapes, because there are 7 notes in the major scale and 7 modes OF the major scale - 1 shape starting from each note/mode.)
CAGED is an incomplete system. It randomly excludes 2 of the 7 major scale patterns/modes. That leaves you with only 71% of available shapes / modes to play in a particular major key under this system. The remaining 2 major scale shapes and 2 modal fingerings starting from their own root note are mysteriously left out and ignored! Hmm… 71% hardly sounds like a complete system to me.
But that’s not even the worst of it…
The 5 shapes of the major scale that the CAGED system does account for makes it impossible to easily transition from major scales to harmonic minor, melodic minor, modal keys, or exotic scales (more on this later). To learn any of these scales, you must completely abandon the CAGED system and start over with TOTALLY new patterns that little or no resemblance to the limiting major scale box patterns of CAGED.
All of these limitations make it harder to fluently improvise on the entire fretboard. 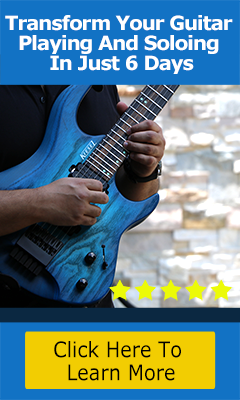 Problem #3: Your Guitar Solos Will All Tend To Sound The Same… Here’s Why:
It is easy to tell when guitarists try to use the CAGED system for soloing. Why? Because their solos often sound “boxed in” and restricted to one box shape of the CAGED system at a time. It typically sounds like this: you start playing around in one of the 5 boxes, then you get bored and move to the next box and play in it for a while. Then you go to the next box, and so on. The worst part is that these transitions you make from one box to the next sound predictable, obvious and boring to most listeners. As a result, your solos tend to sound very similar to each other because your approach to soloing is similar.
This is caused by only visualizing scales as “vertical boxes” (from the 6th string to the 1st string), and not clearly & instantly visualizing how scales are integrated horizontally & diagonally on the fretboard. Fluent, seamless and expressive phrasing is difficult to achieve due to the limiting way the vast majority of CAGED users think about scales on the guitar.
Of course the problem of having too much similarity in guitar solos (and only visualizing scale shapes vertically) is NOT only limited to CAGED users. However, this problem is much worse and a lot harder to fix for CAGED users. Why? Because it’s harder to visualize scales integrated in all ways when your thought process is based on 5 vertical box patterns. It’s harder to fluently improvise everywhere on the guitar.
CAGED is a visual “crutch”. Most guitar players who learn and rely on it become hopelessly lost when trying to visualize integrated scales on the fretboard.
When I teach guitar students the superior 3-Notes-Per-String system, fixing their creative guitar soloing problems becomes a whole lot easier (for both them and me). This is part of the reason why my guitar students become excellent guitar players quickly.
Problem #4: It Will Be Harder For You To Creatively Use Arpeggios In Your Guitar Solos (Yes, Blues Guitarists - This Hurts You Too!)
No matter what style you play, mastery of arpeggios is a key element to effortless, creative guitar soloing. Why? Because arpeggios outline the chords you are playing over. Regardless of how you play them, arpeggios are used in every popular style of music. You need to be able to instantly visualize them in relation to the scale positions you use when soloing. Doing so makes it easy to find the right notes to play when improvising over specific chords (more on this below). This applies in exactly the same way whether you are soloing over a 12-bar blues progression, a progressive rock song, a jazz tune or face-melting metal tracks.
Trending Articles:

How To Become A Great Guitarist
Learn powerful principles that that will transform your playing.

How To Reach Guitar Playing Goals
Learn how to reach your goals for guitar with this free mini course.
The CAGED system completely fails to help you achieve either of the goals above. Here is why:
CAGED is based on arbitrary open major chords that move up and down the fretboard (using your index finger as a barre to represent the nut). This might work for playing open major chord shapes, but playing sweepable arpeggios in at least 2 octaves is not possible. Most resulting major chord arpeggios (under CAGED) are awkward to play accurately and fast (especially compared to standard sweep picking arpeggio shapes).
Worst of all, when you want to use the most efficient fingerings (and picking patterns) for arpeggios on guitar, they will NOT integrate well with the CAGED system. As a result of this disconnect between your visualization of scale and arpeggio shapes, you will have a very hard time creatively applying your musical skills.
“But Tom, some famous guitar players who use CAGED play phrases that outline chord shapes/chord fragments”
There are 4 problems with this argument:
1. It's another (false) Argument From Authority, and a logical fallacy. Also, many professional players who you may think are using CAGED, actually aren’t, or at least need to make variations on that system to make it work. Tommaso Zillio (PHD) eloquently wrote about this in his article on why CAGED sucks.
2. Obviously, many scale systems contain chord shapes, not just CAGED scales. The 3-Notes-Per-String scale fingerings contain more chord patterns because there are more notes and more fingerings. Most importantly, the 3-Notes-Per-String scale fingerings are not tied to arbitrary open chord shapes that are very difficult to sweep pick through.
3. The CAGED scale shapes are only based on open string major chords. No minor chords. This is an incomplete way to look at or think about scale patterns and their relationships to chords. Why would you want to use any system that is based only on major chords? It’s simply too limiting.

4. Now the biggest problem comes: Imagine you are improvising a guitar solo in the key of D minor and you want to use the following CAGED scale position below:

Learn how to accelerate your guitar playing by taking electric guitar online lessons.