ENTER YOUR NAME AND
EMAIL TO GET ACCESS
FREE EGUIDE

… this lead guitar solo article on polyrhythms & polymeter will show you how.

… they are quite simple when you break them down. (Which I’ll do for you in this article.)

ENTER YOUR NAME AND
EMAIL TO GET ACCESS
FREE EGUIDE

Once you understand polyrhythm & polymeter - you can use them to write better guitar licks, guitar solos and better songs starting today.

And when you do – you’ll sound like a pro, even if you haven’t been playing guitar for very long.

… and show you lots of examples of each using cool lead guitar licks you can plug into your next guitar solo.

As you can hear: when you use polyrhythm & polymeter in your guitar licks – you create musical tension. This makes your listener want to get the resolution of that tension.

Using polyrhythms (and polymeter) in your music gives you the ability to create and control this desire in your listeners.

Now that you know how polymeter and polyrhythm work…

Here are a few more ways to use polyrhythms and polymeter to write better guitar solos and songs:

What the heck is rubato?

Rubato happens when you don’t play straight note values (like 8th notes, 16th notes or triplets). Instead, you expand and contract the timing of the notes in your lead guitar licks. You speed up the notes of your licks or slow down in unexpected ways.

Here is why rubato helps you play and write better guitar solos:

When you always practice guitar with metronome, you get used to guitar playing (and improvising) with long streams of 16th notes, triplets and quarter notes.

This can make the guitar solos you write sound boring (even when you are making good note choices in your guitar licks).

But with rubato, you will intentionally play lead guitar melodies without a clear rhythm to build dramatic musical tension. When you integrate rubato with your other lead guitar techniques, your solos begin to sound truly incredible!

Watch this video to see how to do rubato the right way:

Both approaches sound great and both make the guitar solos and songs you write sound very advanced and very creative.

This is one reason why I say: practicing guitar with a metronome can both help and hurt you.

But when you practice both – you can write better songs and guitar solos. 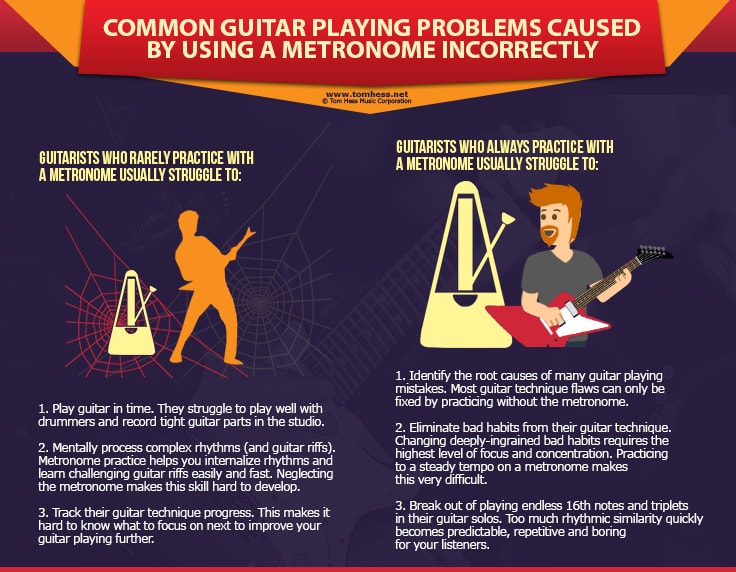 Answer: Rubato works for everything in music (lead guitar licks and solos, as well as rhythm guitar). However. If you play rock or heavy metal rhythm guitar riffs (that need to be double tracked) – you are better off not using rubato on them.

It’s almost impossible to double track a rubato line. This makes polymeter and polyrhythm ideas a better choice for rhythm playing (in general).

Polyrhythms & Polymeter Tip #2: Create A Break In The Pattern

The reason polyrhythms and polymeters have such a cool effect in music is because they take advantage of a phenomenon called:

“A break in the pattern”.

What this means is:

You set up an expectation in the listener’s mind for the music (for example: a part of a song or guitar solo you wrote) to continue a certain way. And then you… break that expectation (with the next guitar lick you play in your guitar solo) and do the opposite of what they expect.

Watch this video to see an example:

In this video you can see me play a simple 3-string arpeggio guitar lick in 2 ways: first I play it straight up and down…

… and then I play it by doubling up on 2 of its notes – creating a break in the pattern of the guitar lick.

This idea is not directly related to polyrhythms or polymeter – but it IS congruent with the principle of breaking the listener’s expectation pattern.

And THAT helps you write better songs and create better guitar solos.

Here is another example of a break in the pattern – this time it is related to rhythm:

This is an example of a rhythmic concept called “3 against 4”. We start by playing a pedal tone lead guitar lick using 16th notes (4 notes per beat)…

… and suddenly we switch the accents in the measure, to have them fall on the first of every three 16th notes.

Nothing changed about the speed or the rhythm of the notes themselves in the guitar lick. Only the placement of the accents changed.

We are still playing the same number of 16th notes per measure. Only instead of grouping them by sets of 4, we group into sets of 3.

This little trick of breaking the pattern allows you to “get away with” playing the same lick over and over and have it sound cool and exciting to your listeners.

That is one of the secrets to writing better songs and more interesting guitar solos.

Note: ideas like this also buy you more time to think of what to play next when you improvise guitar licks during your guitar solos.

That’s because your hands are still playing the same notes (even if the rhythm of the notes has changed) – thus allowing you more time to think of the next guitar lick to play.

Polyrhythms & Polymeter Tip #3: Use Rhythm As A Creative Element For Songwriting And Guitar Solos

One of the secrets to writing better songs (and better guitar solos) is to think about rhythm just as much (or more) as you think about the notes you play. 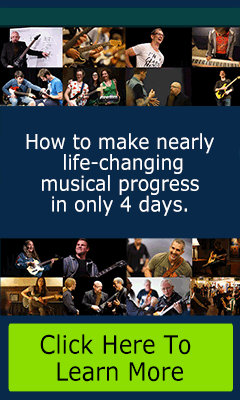 There are only 12 notes in a chromatic scale. Even if you spread them out over several octaves – there is still a very limited number of notes you can play in your songs and guitar solos.

(Of course there are other musical elements that help you write better songs too. But this article is about polyhythm and polymeter… so we’ll save discussion about the other elements for another time.)

But speaking of rhythm – do this to make the rhythm of your guitar licks, guitar solos and songs more interesting:

Question: “But Tom Hess, what if I don’t know how to count rhythms and note values?”

Answer: The best thing to do is take guitar lessons with an expert teacher who can teach you how (often - in just a few lessons). You can also simply enter rhythms into a notation program like Guitar Pro (or a similar program). This way you will hear what rhythm sound like without being able to count them.

Then you can use the sounds of the rhythms when creating your own guitar licks.

Polyrhythms & Polymeter Tip #4: Mix It In With Syncopation

There is nothing wrong with that sound, except: if you overdo it - it gets pretty boring. To write better songs and better guitar solos, mix up starting everything on the downbeat with syncopation.

As you might guess, syncopation means: starting your licks on the upbeat. This goes along with the principles of building musical tension and creating a break in the pattern.

Watch this video to see how to use syncopation to write better songs:

You can also use syncopation with polyrhythms and polymeter ideas.

Bonus tip: combine syncopation in your guitar licks and songs with a technique called: “soloing over the bar”.

To solo over the bar, you need to set up a chord progression with 1 chord per measure.

Then you play a guitar lick that lasts over both chords – taking advantage of common tones.

Then you play 1 phrase that lasts from measure 1 into measure 2.

To do that, you need to look at the common tones between the 2 chords.

The E major chord has notes E G# and B.

So, what you do is: play a guitar lick over the E major chord and choose one of the common notes to end on as you go into measure 2.

This does require a bit of pre-planning. But this kind of thinking is part of the process that allows you to write better songs and write better guitar solos.

Because any sloppiness in your playing gets magnified when you try to sync up not one, but TWO rhythm guitar parts.

The 2 most important elements of tight rhythm guitar playing are:

- having control over palm muting

But when it comes to polymeter and polyrhythms – palm muting control is perhaps most important of all.

When you play 2 separate rhythm guitar parts when writing a song – each part must be clearly heard.

And you can only achieve this when you are totally consistent in which notes you are muting and which ones you are not muting.

Question: “But Tom Hess, what if I don’t write heavy metal songs as the video shows? Can I still use these ideas to write better songs?”

Answer: Of course. The principle here is: concentrate on playing guitar tight (especially when you use distortion and are playing polyrhythmic ideas in your music). This applies to any rock-based style and is important for writing better songs and writing better guitar licks and solos.

Good news is: palm muting control is quite simple.

All you need is to listen carefully when you play.

Then decide on the amount of muting intensity you want to hear in your guitar riffs… and listen to make sure you are playing with that level of muting at all times.

Of course, you can vary the muting intensity… but make sure it happens deliberately – not randomly!

Now that you know how to use polymeter and polyrhythms in your music, what’s next?

The next step is to transform the rest of your guitar playing – starting with your fretting hand.

Want to become a better guitar player? Learn how with the most proven rock guitar lessons on the internet.