Want to know the secrets behind Steve Vai’s great guitar playing (and use them to make YOURSELF a much better guitarist)? Hint: looking for tab of his music or mindlessly memorizing the notes of his guitar solos won’t help you do this, since you are only observing the “result” of his greatness, instead of the “reasons” for it.

Here are the TRUE reasons for Vai’s world-class guitar playing and the lessons each one holds for you:

When talking about Steve Vai’s guitar playing, most people focus on individual musical elements he has mastered, such as guitar technique, phrasing or creativity. Although Vai has mastered those things, his musical greatness is REALLY due to “the whole being greater than the sum of its parts”. Vai’s unique and recognizable musical style is the result of his ability to creatively combine his guitar skills together.

Next time you listen to a Steve Vai album, instead of focusing only on one or two elements of his guitar playing, pay attention to: 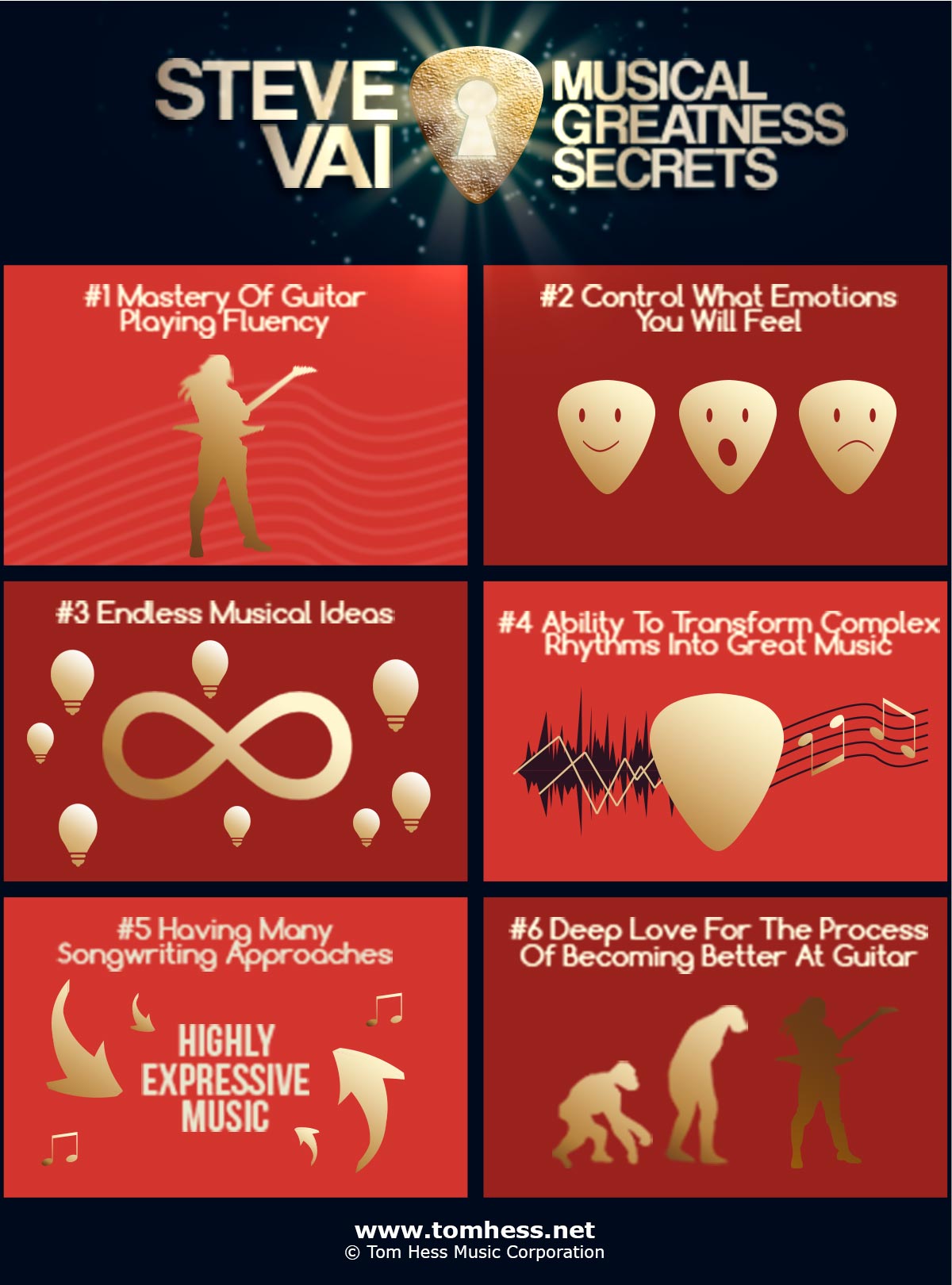 Note: the specific skills that are being integrated are actually very common to all guitar players. Anyone can easily learn the same scales, arpeggios, licks, and techniques that Steve Vai knows. Yet it is the process of becoming fluent at combining (integrating) these skills together that results in one’s unique guitar playing style. This is why great guitarists such as Steve Vai, Yngwie Malmsteen and John Petrucci (among other world-class guitarists) are great at what they do, yet sound NOTHING alike.

Steve Vai’s Musical Greatness Secret #2: Ability To Control What Emotions YOU Will Feel From His Guitar Playing

If you have ever seen Steve Vai play live, you know that he expresses his passion for the music he plays with every ounce of his being, in every note he plays. You can literally see the emotional effects by watching how his facial expressions and body language change as he plays. These are not some cheesy, theatrical grimaces that he does to entertain the audience- these are REAL emotions coming through his guitar / amplifier that everyone in the audience can easily feel.

To reach the Holy Grail of guitar playing mastery (being able to create emotion and literally choose what your listeners will feel when you play guitar), you must:

Check out the MASSIVE difference that the above nuances can make to turn a “pretty good” guitar solo into a GREAT one in this guitar solo video lesson.

During Vai';s live performances, he often improvises long, expressive guitar solos that can last several minutes or longer. In fact, he will often create entire musical sections by simply recording his own rhythm parts on stage and looping them to create a backing track to solo over. His ability to come up with seemingly endless guitar solo and song ideas is the result of 2 things:

Although Steve Vai has been playing guitar for decades, it doesn’t have to take you that long to become great at improvising. To speed up the process of becoming a more fluent, self-expressive and prolific improviser, do the following:

As you implement the ideas of this article into your guitar playing, you will get on the path towards becoming a much better guitarist and musician. To make even more progress and push your guitar playing to the level of greatness Steve Vai has reached, work with a great guitar teacher who can help you master all skills that go into reaching your musical goals.

Learn how to become a better guitar player faster every time you practice.