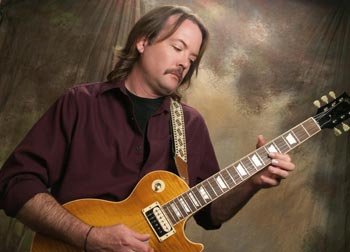 Tevis began playing guitar in 1980 after receiving a ¾ Montgomery Ward acoustic for Christmas. He began lessons with local guitarist and current owner of El Rey Music Tom Henrichsen and also studied with Scot Ashley, a Chicago session player and member of The 33 Band.

Jump ahead to 2007, Tevis signed up with virtuoso Tom Hess for lessons and is also currently involved in the Music Careers Mentoring Program.

Tevis says that these decisions were: “Two of the wisest choices to date musically speaking”.

Tevis is influenced by a wide spectrum of players and genres from the gritty urban blues of Otis Rush, to the late night smoking lines of Kenny Burrell or the melodic works of Michael Schenker and Uli Jon Roth.

Tevis has worked with a few bands over the years from the hard and heavy Battle Array in the late 80’s on to some blues and R&B with Jerry Lee and the Groove Machine with one album to boot “In the Groove” from 1991. In late 2006 Tevis played on “Celestial Love Jones” by the band Poppy and The Usual Suspects, a CD with a strong mix of blues and rock.

In fall of 2007, Tevis joined Terashain, a Phoenix-based melodic hard rock band and he also picked up an endorsement with In Tune Guitar Picks. Terashain is currently rehearsing for upcoming shows as well as writing new material for a CD.

Ready To Become A Killer Guitarist, But Don't Know Where To Begin?

No problem. Just follow the same path as Tevis and take guitar lessons.

Taking lessons with an experienced guitar teacher is the easiest and fastest way to strengthen your weaknesses and develop new skills that make your guitar playing sound truly unforgettable!