Articles For Guitar Players, Musicians And Guitar Teachers \ How To Become A Professional Musician

IS YOUR MUSIC CAREER ON THE RIGHT TRACK?

“What does it take to become a professional guitar player and musician?” The answer remains a huge mystery for the vast majority of musicians. Traditionally, conventional wisdom has offered three separate statements that are supposed to be answers or explanations to the question. I choose to call them what they are...MYTHS! Here they are starting from the most common myth:

MYTH number 1: If all musicians knew how to do it then everyone would be doing it.

MYTH number 2: Musicians have to get lucky, get discovered, and to do that they need to be in the right place at the right time.

IS YOUR MUSIC CAREER ON THE RIGHT TRACK?

Like most guitar players of my generation, my friends and I (back when we were in high school) believed each one of these so-called answers to our own questions about how we could make our records, tour the world as professional guitarists, become rock stars, etc, etc, etc,. Since we all knew absolutely nothing about how the music industry really worked, the types of statements we heard from the adults around us (non-professional musicians who were also clueless about the music industry) seemed logical enough for us.

So in addition to doing all the stuff that music students do (taking guitar lessons, reading about music, listening to music, practicing my instrument, jamming with friends, forming bands and dreaming about making it), I figured I needed to do more than the obvious (improving as a musician). I needed to try to discover how to become a professional guitarist, how to create luck, how to know where the right place and right time is (and then figure out how to get there), how to get discovered, how to become more talented faster, and how to make key contacts with people in the music industry.

Becoming more talented faster was the easiest task since I did have a really good  music teacher who helped me dramatically increase the rate at which I improved my musical skills (you can check out that story here). But all of the other things seemed out of reach (it didn’t help that I lived far away from any of the music centers in the United States.). My greatest perceived challenge was that virtually everything I thought I needed to happen for me was out of my own control (so I thought). In reality, my truly greatest problem was that I was aimlessly chasing all the wrong things (and in the wrong order).

Let’s go back to the conventional wisdom (the myths about the music industry) and we’ll see how it is all wrong. 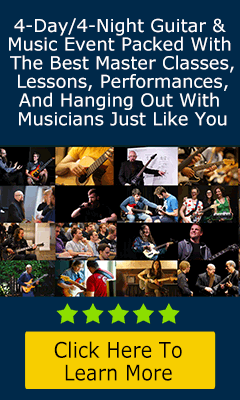 MYTH number 1: If all musicians knew how to do it [become professional musicians] then everyone would be doing it.

This could not be more false. There are millions of guitar players in the world today who dream and desire to be professional musicians who are successful and famous, or whatever. Now that I actually do know (and have done) what it takes to become a professional in the music industry, I also know that the vast majority of people are simply not willing to do what it takes to make it. Many talk about it, dreams about it and some even try it, but very few musicians have the will to take accurate-consistent-forward-moving-intense-action over the long term. This is also the primary reason why most people in America who want to be wealthy are not wealthy. (the opportunities exist for every American to become wealthy who wants to be). The problem isn’t in knowing what to do. The main problem for most musicians is that they would not choose to do what it takes even if they did know what to do and how to do it.

MYTH number 2: Musicians have to get lucky, get discovered, and to do that they need to be in the right place at the right time.

I could talk about luck for many hours, but instead, I’ll just say this:

“Luck is the residue of design”

“Luck can be created, directed, manipulated and controlled” (at least in how it applies to our topic)

Being in the right place at the right time is very, very, very easy to do. Have you ever heard of music industry showcases? Or Record Label showcases? Or MobFest? These are events (and there are many of these around the world) where you (YES YOU) could go to (for  a very small fee usually) and bring your songs, CDs, etc. and give them to music producers, music publishers, record company, A&R people, etc.

But before you get all excited about these opportunities, you need to know that a very tiny percentage of the musicians who attend these events ever get anything out of it. Why? How can this be? Certainly there are many talented people there who are all in the right place at the right time. So why do so few walk away without anything significant after meeting with key people in the music industry? Think about the answer before reading any further......

Was your answer something like this?: “Perhaps the record companies and music producers, are only looking for 2 guitar players or bands. So if 100 musicians attend the event, 98% of those musicians will go home with nothing.” That would seem to make sense, but is that how it really is????? No, it is NOT!

Many times it is the music industry people who go home with nothing. They meet all of the musicians and most often choose not to work with any of them. It is also very important to know that the music industry is starving for new talent, with great music. Many of the musicians attending these events are very talented and do have excellent, marketable music. So it would seem that everything matches and deals could be made. But it doesn’t generally work like that, it’s not that simple. Music industry companies aren’t going to invest hundreds of thousands of dollars into an artist/band's music career unless these companies are TOTALLY CERTAIN they are going to make a lot of money (and not lose their huge financial and time investments). So now, the truth comes out. And that truth is this: Investing large sums of money on Human Beings is extremely risky. When music companies work with you, they are investing in YOU - not just your music. They need to be convinced that an investment in YOU is going to make them tons of money with the least amount of risk. Yes, music publishers want good songs and record companies want good music and musicians, but they want to find the “right people”. That does not necessarily mean only a musician with a name.

Why Talented Musicians Often Fail
See how great musicians can often  defeat themselves in their careers.

What Music Companies Want Most
Learn what music companies want from you & how to give it to them.

I’ll give you a very simplistic example. Let’s say there exists a great musician with a great band and great songs. In addition the band has already established a strong fan base on a regional level and sold a respectable amount of records (for a band without a record company behind it). Now let’s say the primary songwriter and lead singer are unstable, drug addicts. Now, put yourself in the shoes of the manger, record company, etc. Would you be willing to invest your $450,000 into a talented band with great, marketable songs and an established local fan base if the primary musicians in the band did not have their %&#@ together mentally? I wouldn’t and most companies nowadays won’t either. In the past, some record companies did invest in these types of musicians and sooner or later they usually got burned and lost lots of money when the walls around the bands came tumbling down. This was an extreme example, but serves to illustrate how the risks associated with the musicians (people) can kill an opportunity.

For many reasons, it has become harder and harder for record companies to make money. (This is worth going into detail about for your understanding, but is too huge a topic to get into here and now.) The bottom line is this, In searching for musicians to work with, music businesses will be looking for things that go WAY BEYOND the musician’s musical skills, bands, songs or recordings. Many musicians can’t understand why their latest CD won’t attract the interests of the industry (even if the songs and the recordings are amazingly great).

Music producers, music publishers, record companies and music career managers are starving for great new talented bands, songwriters and singers. And if all 100 musicians had everything about them that was ideal in the music industry’s eyes, all 100 of them would have been offered many opportunities.

The fallacy is that the competition is too great, there are simply way too many musicians out there trying to become rock stars. The reality is NOT that record companies have “too many musicians out there to choose from”. The reality is there are not nearly enough of musicians out there who have “the total package together”. That total package goes far beyond music, far beyond your band and far beyond your songs. The secret to what is missing in most musicians, is what is (or is not) in their minds. Joan of Arc once said, “All battles are first won or lost in the mind.” This is perhaps even more true today than it was in her time.

My reply to this is basically the same as my response to myth number 2. I’ll simply add this thought about contacts: Record company A&R guys, music executives, music career managers, music producers, and music publishers know thousands of musicians (and have met thousands more throughout their lifetime). Just because somebody “knows” somebody else doesn’t count for anything – unless two primary things are intact:

It took me many years to come to these understandings, and they are true. Certainly we could point out some exceptions to what I’m writing here. The further back in time we look, the more likely we are to discover such exceptions. But the music industry is extremely different now than it was in the 1970’s, 1980’s, 1990’s and even the first 2-4 years of this decade. It has evolved quickly and the nature of how the game is played has changed dramatically. As a musician, the most fundamental change that you need to understand that has taken place in the industry is this:

This is the primary reason why in my Music Careers Mentoring Program my first priority is in changing the musician’s mind to help them become the “right person”. Then (and only then) do we begin to work on developing the additional skills and tools to advance the musician's future (or current) career in music.

So...my advice to you (those seeking a music career) is:

To learn more about becoming a professional musician, read parts 2-5 in this article series:

Is your music career on
the right track?
FREE ASSESSMENT Test Yourself Now

If you are serious about starting or expanding your music career, learn the facts about becoming a professional musician.